The prolific John Godber has created another superb social comedy, the laughs arising naturally out of the strong yet abrasive relationship between Al and Bet.

The couple win a trip to Paris in a competition and their journey across the channel proves to be a bit of an eye-opener, an agent for change.

There are some terrific moments in the play – Bet (Wendi Peters) becoming seasick, Al (Rob Angell) awe-struck by the Mona Lisa – and the ending is suitably heart-warming.  Their marriage has been rejuvenated: see those green shoots of spring.

An entertaining and uplifting play, so crammed with incident that it’s surprising there are only two actors on stage throughout.  And the set in the second half is a thing of beauty in itself.  A triumph.

There were three works from the Second Viennese School, or the school of serialism, in this splendid concert.

What matters ultimately, of course, is not school or aesthetic allegiance but talent; and the talents on show were immense, though their works seemed quite different in nature.

The first work was Webern’s Five Movements for String Quartet, a tense and unsettling tour de force.  An inconsolable loss is conveyed, a fraught and fragile state of mind.  Everything seems complicated and difficult, or is made so.

Berg’s Violin Concerto, composed in 1935 shortly before his death, was performed next.  It can be seen as an elegy upon the death of a young woman, Manon Gropius, the daughter of Alma Mahler.  In musical terms, it is interesting for the way in which an atonal work can yet be imbued with deep emotion.  In a telling manner, the virtuoso violin-playing of Gordan Nikolitch underlined a paradox that lay at the heart of Berg’s astounding achievement.  For if the rationale of serialism was to remove rhetoric and therefore lyricism from music altogether – by creating works that seemed to have no key, a natural form of emphasis – then it signally failed in this case.

The concert culminated with a performance of Schoenberg’s sublime Verklarte Nacht (Transfigured Night), which was accompanied by a series of stark black and white images by Netia Jones: a film inspired by a musical work, which was in fact inspired by a poem by Richard Dehmel.  This was like watching a lost silent film with live accompaniment.

Revolutionary Vienna was a wonderful experience, as well as being something of an eye-opener. 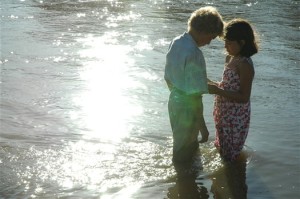 Still from The Last Summer of La Boyita

What seems to be a film simply about a teenage romance turns suddenly into a contemplation of androgyny and the social construction of gender.

Although, in retrospect, one can see how the seeds for this sudden turn had been planted oh so carefully beforehand.

It is a very unusual subject for a film and it is treated here with subtlety and intelligence.  The director and writer, Julia Solomonoff, has cajoled some excellent performances out of the younger members of her cast, notably from Guadalupe Alonso as Jorgelina.

One forgets, sometimes, that puberty was such a strange transformative state.  This film will help you remember and, who knows, you might even shudder a little.  What you are left with is a nostalgic, moving, unsettling, perilous experience.

There are three monologues, at first individual and unconnected, though gradually they relate to each other, so that in the end they coalesce around the same extraordinary events.

What brings the play alive is Mark O’Rowe’s language, which is vital, earthy, scabrous, playful and musical both.  Naturally, this would amount to nowt if the delivery and performances were wanting in some small way; here they were brilliant, spot on.

It is probably no coincidence that one of the characters mentioned in the play is named Celine: O’Rowe’s language has something of the same swaggering quality to be found in the great French writer’s works.  And here too we journey to the end of the night.

Quite an extraordinary experience. 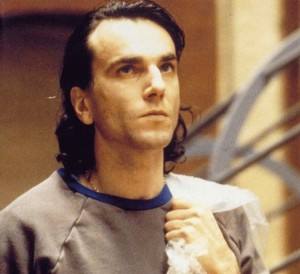 Still from In the Name of the Father

The film tells the story of Gerry Conlon, one of the Guildford Four.

It is a vivid, effective account, graced by some fine performances, notably from Daniel Day-Lewis as Gerry and the late Pete Postlethwaite as his father Giuseppe.

Jim Sheridan’s inventiveness as a director comes into its own in his depiction of riots: street riots, commotions in court, prison riots.  Sure he’s your man if you want to film a riot.

There are some nice touches of Irish Catholic humour and behaviour, which anyone who’s been blessed with a grandmother who’s had a portrait of the Pope above her mantle-piece will appreciate.  As a for instance, Gerry is told by his mother to wear his Sunday best when he appears in court.

Whatever faults the film has – there’s an occasional superficiality – are due to the genre and the limitations of the medium withal.  You cannot expect all the detail of a judicial enquiry, now can you?

This was a lot of fun: six stories by Maupassant, freely adapted for the stage, with music and song betwixt them.

The second story in part 1 was ‘The Mannerism’, but it wasn’t necessary to recognise a particular story to enjoy it, of course.

In the main, the stories focused on sexual indiscretions and unusual sexual arrangements and were related with wit and humour.  The closest that we came to a conte cruel was with the third story in part 1: two peasant girls are employed to nurse a dying man, once a local bully, and old grievances emerge…   There were no tales in which Normandy peasants torture animals, anyway (such as ‘Coco’); they wouldn’t have gone down very well, I suppose.

Any show which features accordion music is well worth seeing, in my book.  More than that, French Fancies was amusing, delectable and in places quite risqué; and it is at The Lowry until 26 March.  Details here.

Also, my review of a volume of Maupassant’s darker stories can be read here.

Another weird and wonderful Peruvian film, so rejoice!

A baby is left at the home of Clemente, a pawnbroker: the fruit, apparently, of a liaison between himself and a prostitute.  So now he must either find her (the mother, that is) or care for her (the baby, an adorable girl).  It’s a quest movie, yes, yet it’s also about social connection, the human heart.

The pawnbroker is played by Bruno Odar, and a fantastic actor he is too.  Deadpan as all hell, he never cracks a smile here.  In essence what we have is a portrait of a man whose every social interaction involves money (he pays prostitutes for sex, he eats in restaurants, he rides in taxis) and then he receives this wonderful child, who’s a gift and a miracle.

Does the child change the man or is she like a dud banknote, received through absent-minded oversight, which he cannot get rid of?  Is the child a miracle to be cherished or an inconvenience, yet another sign that the world and its people are not to be trusted?

Octubre is a rich and rewarding film, full of unexpected pleasures and treasures.

Close to perfection, in so far as this Shakespeare production is compellingly contemporary yet remains true to the text.

Derek Jacobi’s Lear is crucial, of course, but more than that it is the performances of those actors around him, their characters’ various responses to Lear’s decline, that complete the play.

In this respect, Ron Cook as The Fool was exemplary.

A small digression: when Freud’s cancer became seriously bad and began to eat away at him (he chose not to treat it with drugs) a malignant growth on his neck began to smell something awful.  The smell was such that his dog, a family pet of several years, recoiled away from him in fear, perhaps because on some level it failed to recognise its master.  At the end of scene fifteen, Cook’s haunted look as he exited the stage put me in mind of this episode.

This is pretty much a must-see production.  King Lear is at The Lowry until 26 March then tours throughout the UK up until about the middle of April.  Details here.

It focuses on the war in Iraq, and in particular on the role played by private security companies.  When working for one such company, Fergus’s friend Frankie is killed in suspicious circumstances.  Fergus resolves to uncover the truth about Frankie’s death but it costs him dearly.

In a way, this is an untypical Ken Loach film because of the prevalence of violence.  However, Loach undercuts the spectacle of violence – which cinema as a visual medium seems to revel in – by showing that when bombs explode the innocent die and that the tortured rarely speak true.

The film has a superb central performance by Mark Womack as Fergus Molloy.  He, like Chester Himes’s ‘blind man with a pistol’, ultimately only adds to the evil in the world.

Burlesque!
By The Slippery Belle
The Lowry, 19 March 2011 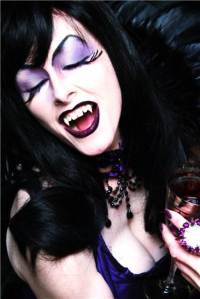 In this show – compered by the regal and risqué Rosie Lugosi, Vampire Queen extraordinaire, complete with maid and swagger stick – there were a quintet of acts, all told.

Coco Malone was the classiest by far: she had a voice of unparalleled power and opulence.  Her performance was a scrumptious slice of heaven.

One could argue (please put it on the agenda at your local philosophy seminar) whether Audacity Chutzpah possesses a tautological stage name; however, the young woman certainly lived up to it.  She combined striptease with humour and her routines also had an involved narrative.  The second one surveyed the history of women’s struggle for equality and made some telling (if perhaps ultimately problematic) political points.  It was instructive, insightful and tantalising in equal measure.

There was fire-eating, contortion and yet more tease on display in the other three acts.

A decadent flower blossomed, and I don’t just mean the compere.