At one time, in a less colourful age perhaps, the diary or calendar was a humbler or at any rate a simpler beast.

Yes, you’d be allowed to plan your year and record the occasional daily thought.  Most likely, you’d be able to add a sizable amount of personal information; something we would be most reluctant to do now, what with identity theft being such a current concern.  Nor should we forget the old standbys: that list of religious festivals and holy days, those invaluable imperial to metric conversion charts, the complete international direct dialling codes.  Some of these once hardy perennials retain their place in the modern diary, but others have gone by the wayside.  They’ve been replaced by content that is useful, edifying, identity-defining  or simply colourful and fun to look at.  Maybe even all at once.

Below is a judicious selection of diaries that will be of interest to literary and artistically-minded folk alike:

The Redstone 2012 Diary of the Senses

If you are after proof that all things get better with age, here it is: Redstone’s new diary, their twenty-fourth such outing.

The theme for 2012 is ‘the senses’ and Adam Lowe’s thought-provoking introduction sets the scene.  He asks whether there exist only the traditional five senses, or whether there are other means by which we (like other species, say the many examples in Howard C. Hughes’ Sensory Exotica) can ‘get at’ the world.

In the section of the diary reserved for notes and jottings, Will Hobson considers this question of ‘other senses’ and some of his candidates are empathy, balance, humour, attraction… but proprioception does not get a mention, alas.  A short quotation is used to illustrate each of Hobson’s ‘senses’; Pablo Neruda’s ‘the moon lives under your skin’ passes muster for attraction, as a for-instance.

What’s special about Redstone’s diaries are the images and texts selected to express each chosen theme.  Alongside unusual images from the titans of Western art (here, for example, Picasso, Rembrandt and Rodin are represented) there are also many idiosyncratic images from further afield.  Here, there’s a French postcard showing a reclining opium smoker.  Among the texts, there is an odor-imagination test (Proust’s famous madeleine experience systematised) devised by a psychologist named Bernard I. Murstein in 1965 and William Carlos Williams’ fine poem ‘This is Just to Say’.  But not, however, Kenneth Koch’s witty riposte to this poem, his ‘Variations on a Theme by William Carlos Williams’, which I’d urge you to seek out.  It can be read online here.

More mundanely, there’s a monthly planner and an A-Z section at the back for recording names of friends, or authors read during the year, or what you will.

It is impossible to fault this diary, really.  Even if all the European economies go belly-up in the coming year, and Iran and Israel decide to settle their differences by inaugurating a final Armageddon – well, no matter and so be it.  You’ll at least be able to record your days with some considerable style, and not a little nonchalance. 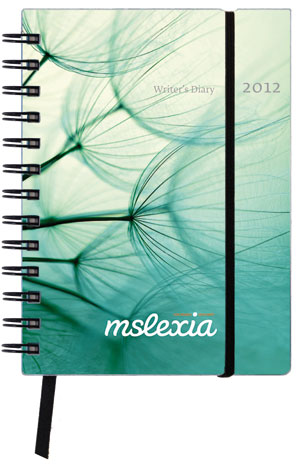 This diary is of particular relevance to the woman writer who is based in the UK .

Mslexia is a magazine ‘for women who write’ and each year they bring out a diary.  Mslexia Writer’s Diary 2012 has a compact, chunky design and  its theme this year is ‘getting away’, seeking out inspiring and enriching experiences.  There are many helpful features to be found in the diary: a table for recording submissions, a directory of writers’ resources (including websites and literary magazines), a list of editing symbols and a manuscript layout guide.  The writing exercises, reading recommendations and quotes/reflections on writing are a highlight.

If you are a woman and a writer and you reside in the UK , this is definitely the diary to own: ‘the essential toolkit for the creative woman on the move’, in the words of the publisher.  However, all writers will find most of the content to be extremely useful, though I’d add the proviso that there’s a bias towards women and the UK. 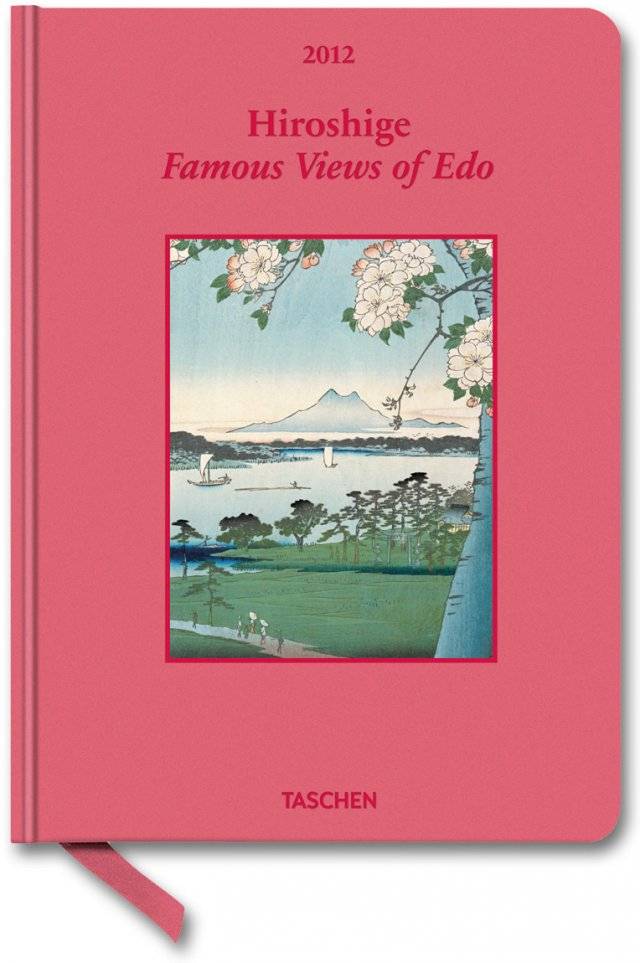 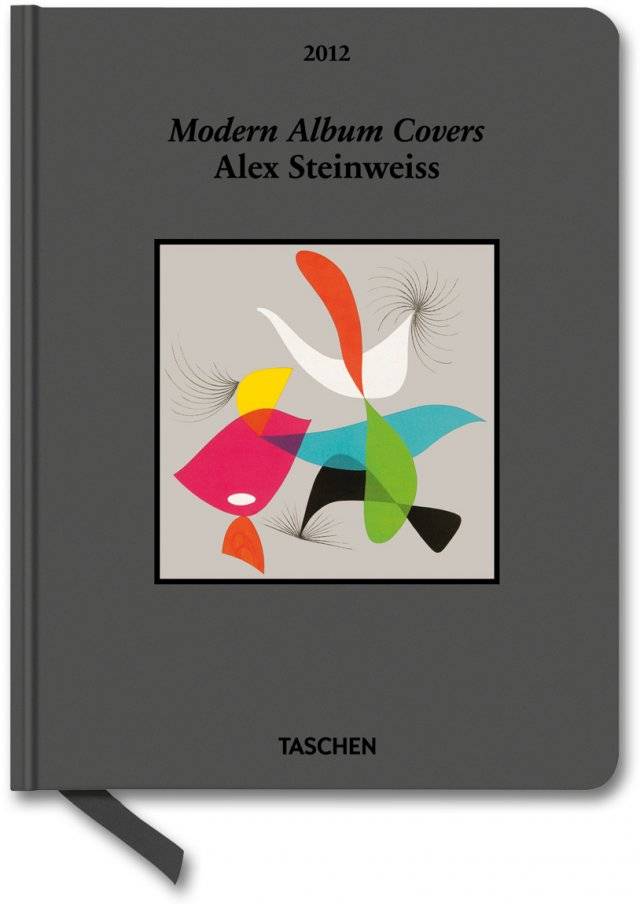 Taschen publish a number of arts-related diaries, above you can see two of them.

The first, bound in sturdy pink cloth, contains just under sixty drawings taken from the great landscape artist’s One Hundred Famous Views of Edo (1856-1858), one of his two late masterpieces.  His other late work was, of course, Thirty-six Views of Mount Fuji, which was also completed in the same year (1858), the year that he died.

There is a drawing for each week of the year, six lines allocated to each day.  At the end of the diary, there is a list of public holidays, a year planner and six pages for notes and jottings.  Inside the back cover is a pocket for holding loose papers.

The second diary, Modern Album Covers – Alex Steinweiss, is designed along the same lines.  Again, there is a cloth cover – grey blue in colour this time.  And again, there are about sixty images, mostly album covers designed by Alex Steinweiss for Columbia Records in the 1940s and 1950s.  Stylish and inventive, they are models of pioneering graphic design.

Both diaries are attractive, well-designed packages.  They, and some others too, can be seen here.

Here’s also a link to Taschen’s edition of One Hundred Famous Views of Edo.

And here’s a link to Alex Steinweiss, The Inventor of the Modern Album Cover.

Compiled by the Metropolitan Museum of Art 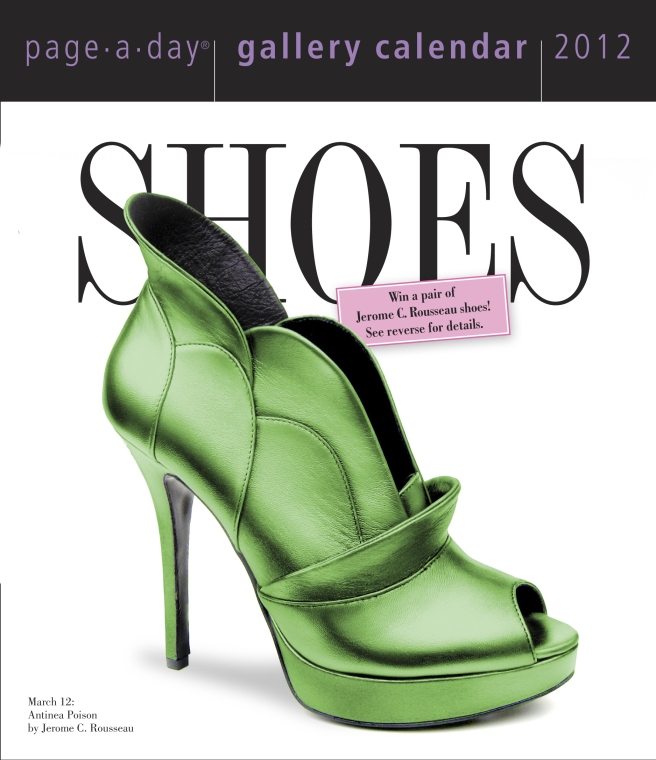 The two calendars above are described by the publisher as being ‘a gallery on your desk’; and that’s pretty much what they are and how they work.

When you receive each calendar you’ll find a sheaf of pages, one for each day of the year, within a three-sided plastic box with a lid; the box has an open front.  You’re able to remove the lid and can attach it to the back of the box, so as to create an easel.  For each day there’s a page which shows a work of art or a shoe, the current exhibit in your desktop gallery.  Just place the top page to the back of the pack, day by day, and you’ll have a new image to enjoy.  It’s a simple design but quite an ingenious one.

In the Art 2012 Gallery Calendar, you’ll find 365 works, all housed in the Metropolitan Museum of Art in New York.  Van Gogh’s self-portrait on the cover appears on the 22 October, after a charcoal drawing by Gauguin and before an ivory figurine from 15th century Nigeria.  There’s a great variety of art on show.

And in the Shoes 2012 Gallery Calendar, there’s a great variety of shoes, shoes, shoes – if they are your thing.  If you dream of floral boots, pink and black flecked slippers, leopard skin mules… well, this is the calendar for you.  Not all of the shoes on show seem designed to be worn – they don’t look as though they’d be very comfortable or cosy, if you took the plunge.  But all can be looked upon with admiration, and even ogled.  Even mermaids would swoon.  You’ve got a year’s supply of tempting images to feed the craving.

View all posts by P.P.O. Kane