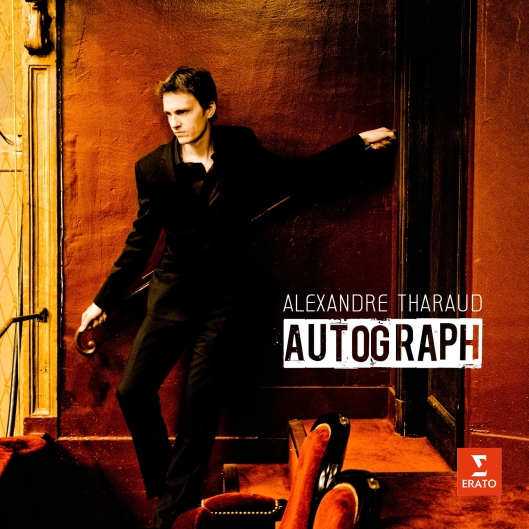 This is an album of ‘encores’ from the brilliant French pianist that we saw at the RNCM about a month ago.

As the title implies, they are signature tunes in a sense, works of personal significance to Tharaud.  He describes the album as making up a ‘coherent mocsaic’, a mosaic that serves as both a self-portrait and a snapshot of his current concert repertoire.

There are twenty three pieces all told, by twenty two different composers.  Only Bach, supreme master of the keyboard, is represented twice and he in fact opens and closes the album.  The longest piece, just short of six minutes, is Grieg’s joyous and infectious Wedding Day at Troldhaugen; the shortest (one and a half minutes) is Tailleferre’s Valse lente.  One of three waltzes (the others are by Sibelius and Chopin), it is characterised by an elegant, clear melody. 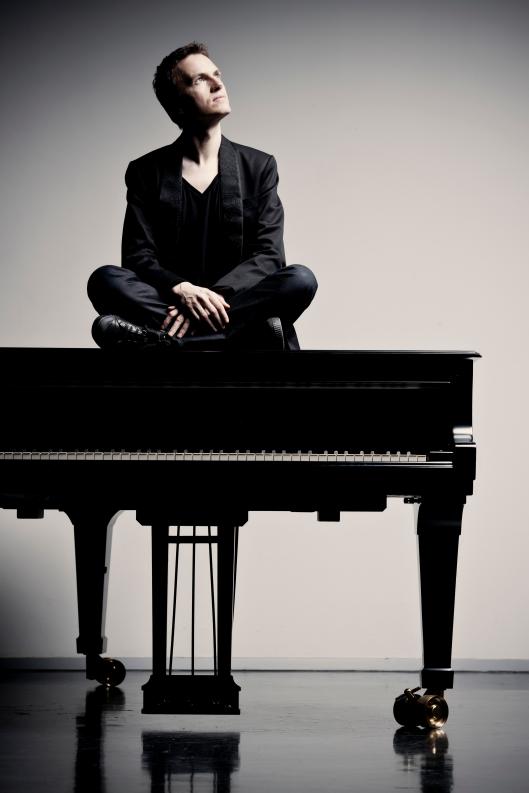 French composers are in the majority, but except for that, these pieces are surprisingly diverse.  A variety of styles and periods are represented, from baroque to avant-garde (e.g. Satie’s Gymnopedie No. 3).  There are myriad moods, though it has to be said that Poulenc’s Melancolie belies its title (unless he intended it to raise one’s spirits), and a profusion of different flavours.  Rameau’s lovely Les Sauvages teases the mind.

Not all performers give encores, as we know.  It is a discretionary act, a gift freely offered.  Think of Tharaud’s enchanting album in the same way, as a gift resplendent with radiant gems.

Further details of the album can be found here.

For this year, the RNCM Strings Day (formerly a weekend) focused on classical music that owed a particular debt to folk music of various kinds.

The day can only be described as action-packed, including as it did workshops and demonstrations, lectures and discussion, individual performances and full-blown concerts.  The events related to each other in interesting ways: so you had, say, a discussion of Janacek’s String Quartet No. 2 in the morning and a performance of the quartet in the evening.  Most events, such as a harp workshop and a wonderful performance of Kodaly’s Duo for violin and cello, were free.  A highlight was the evening concert where, as well as the Zelkova Quartet performing Janacek’s aforementioned ‘Intimate Letters’ (intricate and intense, then all of a sudden outbursts of sunny dance), the RNCM String Ensemble gave us Dvorak’s Serenade for Strings in E major.  It was a joyously  melodic work which gave great pleasure.

A fabulous day, in sum.  Such themed days and weekends are a regular occurrence in the RNCM calendar and are well worthwhile.  Look out for the next one, RNCM Keyboard Day: The Year 1913, which promises to be equally special.

The current (as of a few days ago) world chess champion, Magnus Carlsen, has been called ‘the hero of the computer era’ and quite rightly so.

His style of play – precise and correct, never overly aggressive – is a consequence of using the computer as a training tool and a sparring partner.  The computer will treat any unwarranted aggressive move as an imprecision and punish it accordingly.  You cannot play on its fears, since it has none.  Carlsen’s  game is phenomenally successful –  just glance at his astronomical rating – yet for all that he lacks the fiery imagination of a player like Alekhine or Tal.

In this film Bujalski takes us right back to the ‘80s, to a time when computers were patzers rather than chess colossi.  The computers here are barely able to compete with club players on even terms.  It’s a stylishly low-fi, wonderfully observed film and the more you know about the early days of computer chess (e.g. David Levy’s famous wager, paranoia about Pentagon funding of IT research), the more you’ll appreciate it.  Like the computers and the characters that operate them, the film  has an awkward grace.  My favourite moment occurs when one geek buttonholes another in a bar (after having specifically ordered a glass of  the house red: a nice touch) and recounts an experience when his computer seemed to display an independent intelligence.  He watched as it laid a series of questions on him, questions he couldn’t answer.  A Turing Test Reversed, kind of.

Recently a friend claimed that computers have ruined chess, something I don’t think is quite true.  They have, however, altered the game, forced it to develop in certain ways.  Or accelerated its development in a direction it was heading in anyway, towards greater accuracy, more exhaustive knowledge of the opening and endgame.  Mind, all areas of knowledge and many other sports have been altered by technology: cricket, tennis, rugby, athletics (miniscule false starts couldn’t have been detected without computer technology).  And football will be next.  The limited introduction of ‘video technology’ is just the start.

Anyway, Bujalski has made an excellent film.

A concert deserving of all possible superlatives.

Schiff became Bach for an hour and a half or so, giving a perfect recital of book one of The Well-tempered Clavier.  His focus and feel never wavered.  The music pure and abstract yet not at all dry, evoking joy and sometimes profound emotion.  Rapturous applause followed.  For an encore, he gave us the Moonlight Sonata.  Further rapturous applause, naturally.

At the end, after some mild kerfuffle, Schiff received the fellowship of the RNCM: an honour to add to his many others.  All fully deserved; he’s a great artist.  Envy those who will attend his concerts in London later this year.

Details of the Wigmore Hall concerts can be found here.

David Ondricek, In The Shadow

In every respect a satisfying thriller and a film that also casts a light on the residual anti-Semitism present in communist states in the post-war period.

Why does it grab your attention?  Well, it is one of those thrillers where the police and the state security service and perhaps some other clandestine agency are at loggerheads.  Such thrillers always work when handled aright, at least for me.  They create a tension because there’s an uncertainty as to where genuine authority resides.  The parameters of power are unclear.  You realise that social order is fragile, if not illusory.

The substance of the film concerns a couple of crimes – a jewellery theft, a hold-up at a post office – which supposedly implicate the Jewish community.  One cop strives to uncover the truth, others try to make the charges stick.  Prague looks very pretty and atmospheric and there’s a shot of Kafka’s house at one point, which is surely pertinent.  Kafka was a realist but that’s saying nothing new: Lukacs learnt that lesson in 1956, if you know the story of his arrest.  Those in this trial weren’t as lucky as he.

Details of other films in the UK Jewish Film Festival can be found here.

Few passages are as haunting and fraught with fractured emotion as the second movement of Beethoven’s String Quartet in F major.

There was a pronounced intensity too to Brian Elias’ String Quartet, which received its UK premiere here.

If Brahms’ String Quartet in B flat major is a work of substance (and it certainly is that), it was also sometimes a little too sweet.  He has a wonderful facility for rhythm and melody, this Brahms fellow, and there is a profusion of invention here.  But the melody can be rather, well, emollient.

The encore was a Polka by Shostakovich – and it was an utter delight.  You hungered for it when it was over, it seemed way too (criminally so, in fact) short though was likely just right, you needed to hear it again.  Such brevity, such beauty.

And details of future concerts by the Jerusalem Quartet are here.

Samuels’ play focuses on the relationship between mothers and daughters, what is shared and passed on, what’s unsaid, kept back, yet not quite lost.

Eva, in later life Evelyn, is a Jewish girl sent to England by her parents in the wake of the Nazis’ rise to power.  She arrives safe but not undamaged, and indeed how could it be otherwise?  Although the Holocaust is explicitly alluded to only once, it is a subdued, subtle presence throughout – and for Eva a sinister one, when transmogrified into a childhood monster, the Ratcatcher.

This play put me in mind of Elizabeth Jennings’ A Fear, for like that fine poem its concern is with a pernicious anxiety, burrowed deep, persisting into adulthood.

Music and Lyrics by Stephen Sondheim

This is a gloriously atmospheric production of Sondheim’s great musical.

London is painted in lurid colours, in all its gaudy, Gothic splendor.   David Birrell takes the title role and he’s a genuinely unnerving presence – as unnerving as Sondheim’s jaunty/dissonant music.  He’s a man permanently on edge, with a serious grudge against the world.  Someone you’d cross the road to avoid, just in case.

The black comedy is there in abundance, in the songs and the story itself, but there’s an undercurrent of tragedy as well.  Jacobean tragedy: it has that stench about it.  Something visceral and unpleasant is about to happen.

We all wage a war between our past and our humanity, and if over half the time our humanity wins out, we’re usually OK.  When Sweeney returns to London, that war has been lost long ago.  Redemption is not an existential possibility.  He’s a man bent on revenge – and he gets it.

Sweeney Todd is highly recommended.  It is at the Royal Exchange Theatre until 30 November, further details can be found here.

This moving, memorable film is graced by a fine central performance by Paulina García.

As Gloria, divorced and with her children all grown up, goes from loneliness to love and back again, one cannot help but root for her.  The best scene is the one where she encounters a skeleton doing a dance of death.

She sings aloud and dances with abandon at the close, mind, a sure sign that she is in good spirits after giving her mindfuck of a boyfriend the old heave-ho.  And however you cut it, the bastard got off lightly.  For by rights he should have met the same fate as Philologus.

Not that I was overly invested in Gloria’s character, not at all.