An intriguing film, set in the folk scene in Greenwich Village at the start of the ‘60s.

It is not dynamite storytelling by any means, but it does hold one’s attention.  We follow Llewyn Davis, one time a seaman now a singer on the make.  Same or similar events recur: arguments with family and friends, dinner parties, crashing on the couches of acquaintances, musical performances.  The songs are beautiful, Oscar Isaac’s performances hit home. The one time when he sings to his dad is sublime.  This scene may remind some of the story of Dylan visiting Guthrie in hospital and singing ‘Song to Woody’ to him.

Maybe the film maps onto Homer or Joyce, maybe it all takes place in Davis’s head as he lays in an alley dying.  These are things you may want to ponder afterwards.  He undergoes an odyssey of disappointment, any roads.

Meantime it’s no bother at all to enjoy the film.

Not bombastic, exactly, though there is certainly something of that quality present in her playing.

Silver waves crashing against a craggy cliff, that’s an image that came to mind.  Rowe’s style is characterised by a restless, relentless dynamism.  She is an athletic pianist.

Prokofiev’s Sonata No. 6 in A major was the centrepiece of a superb recital, which also included works by Haydn, Janáček, Scriabin and Chopin.

A memorable concert from an accomplished and mature talent.

By Uta and Thilo von Debschitz

Or, to express it in another way, our understanding of nature, and above all perhaps our own nature, is necessarily metaphorical.  We can only understand the unknown through the known, through what is close at hand, our human habits and cultural practices, artifacts and inventions.  So the invention of the pump preceded our understanding of the heart’s function and the emergence of the computer led in time, and not too much time, to the founding of a new discipline: cognitive science.  It dawned on us that the mind is a computer.  Nature imitates art.

Fritz Kahn was a popular science writer who was most prolific in the ‘20s and ‘30s.  His masterwork was Das Leben des Menschen, a five volume study of human biology which appeared between 1922 and 1931.  As with all his works – and Kahn continued to write about many different fields of science right up until the early 1960s – these volumes were heavily illustrated.  He would design the illustrations and various artists – some known, others unknown and uncredited – would draw them, according to his specifications.  One thing we do know is that ‘Man as Industrial Palace’, perhaps his most famous design, was illustrated by Fritz Schüler:

This book contains just short of 350 illustrations which have been taken from Kahn’s works, together with a small selection of articles he wrote for various publications.  If the latter are characteristic, then it is clear that he had a strikingly visual writing style.  One, entitled ‘Einstein Sonata’, reads like a script for a film: a cosmological epic.  While another, ‘Fairy-tale Journey on the Bloodstream’, most closely resembles Fantastic Voyage (the old Raquel Welch film) recast as a feuilleton, if you can imagine such a thing.  Arthur Schmitson’s accompanying illustrations have an eerie flavour, their landscape reminiscent of some of Alfred Kubin‘s works:

There is a certain quality that’s more typical of the bulk of Kahn’s illustrations, mind, and you might even go so far as to call it his signature.  I’d describe it as a kind of surrealist conceit.  He takes the metaphorical, model-building mode of thinking that lies at the heart of science and uses it to raise a smile, provoke thought and (ultimately) aid understanding.  In one illustration, for example, he will show how a diatom is like a church window; a feat of which Ernest Haeckel, not only a great scientist but an extraordinary artist, and author of the wonderful Kunstformen der Natur, would have approved.  While in another he will compare heat insulation in a man and a thermos flask (!).  My particular favourite (perhaps an acquired taste, I concede) sets out to show that ‘the octopus lives in the position of a man hanging from a horizontal bar’.  Now, how can this illustration and others like it fail to raise a smile?  This is the poetry of incongruity a la Lautréamont.  Here’s a further beautiful example, showing an insect’s wings unfolding like a parachute:

One might well ask: ‘Is this science, and does it matter?’  Of course, the images can be enjoyed for their own sake but it is a question that must be addressed.  We should start by looking at where Kahn was coming from.  He sought to popularize science, his goal was to communicate his passion to the reader, to fire their enthusiasm for the subject.  And he found a unique way of doing so.  By contrast, a working scientist aims for objectivity and strict accuracy.  And yet… and yet note that even scientists cannot do without images of some sort.  As Peter Galison writes: ‘By mimicking nature, an image, even if not in every respect, captures a richness of relations in a way that a logical train of propositions never can.’  Or again, in a reflection on the scientific enterprise itself: ‘The richness of the image and the austerity of the numerical are always falling into each other.’  Incidentally, some of the science here seems dated and/or dodgy yet the images, by and large, continue to delight and astound.  Art has a longer shelf-life.

And a final thought to end: if you substitute the homunculi in the ‘Man as Industrial Palace’ poster above with a flow chart of some sort you would have what is virtually a cybernetic model of man.  Since the poster dates from 1926 and cybernetics from 1948 or so, that would be a truly extraordinary case of nature imitating art.

Fritz Kahn is a beautiful book, full of thought provoking, fascinating images and laden with not a little humour.

The Wolf of Wall Street

Despite the good things here, Leonardo di Caprio’s virtuoso performance above all, it simply moves at too slow a pace.

Many of Scorsese’s familiar stylistic devices are present – the main character speaking directly to camera, sweeping camera movements with accompanying voiceover, etc. – but there’s no real zip to it.  The story is predictable, all about a man’s rise and fall, his sin and redemption.  And it feels baggy and overlong.  So a middling effort, disappointing fare.

With the final scenes you get a sense of the kind of film it might have been: a parable of the talents, contrasting a man (Belfort) who succumbs to the sins of the world yet changes others’ lives and another, an FBI agent who always plays by the rules and whose life is (perhaps, we really don’t know enough) pretty impoverished.  But the FBI agent (played by the fine Kyle Chandler) has been, at best, a minor character and this isn’t the film you’ve seen.

Composed and confident in demeanor, setting their own pace throughout.

Intricate playing of (to list them) Bridge’s Three Idylls and string quartets by Britten and Haydn.  Britten’s filigree melodies (it was the String Quartet No. 2 in C major) the highlight.  All deftly brought into being, delicate statues against the sky.

An amiable manner, at the start and before each movement.  Visible enjoyment of the music.

Vital realisation.  All over.  Triumph.

Irving (Christian Bale) and Sydney (Amy Adams) are con-artists who’ve been caught by the Feds and forced to take part in a sting operation intended to entrap corrupt politicians.

He and she have been promised freedom at the investigation’s end in return for their cooperation, but they don’t quite buy it.  They are on the look-out for their own means of escape.

The film is a crime caper in the vein of Elmore Leonard or Donald Westlake (in particular, it has something of the flavour of the latter’s Dortmunder novels), whilst the cinematography owes a big debt to Scorsese, especially Goodfellas.  Entertainment is what it’s about, and it offers that in abundance; not depth nor darkness nor tragedy.  There is a fine period feel to it all: we are in the late ‘70s, which offers great potential for comedy.  There are splendid performances all around, particularly from Jennifer Lawrence.  Oh, and is it misplaced to see in Christian Bale’s lead performance a tribute to the late, great James Gandolfini?

Just a mite too long, perhaps, otherwise no complaints: a highly enjoyable film.

The Art of Fugue

In the opinion of my friend, this was like watching a Giotto altarpiece come into being right before our eyes.

The Talich Quartet gave a masterful performance of Bach’s great (perhaps his greatest) work, the concert a fitting close to this year’s RNCM Chamber Music Festival.

Over the weekend we heard the Goldberg Variations on Saturday morning, diverse sonatas and the Brandenburg Concertos featured prominently too.

A terrific weekend of Bach and family.

Age of Uprising: The Legend of Michael Kohlhaas

At root, a revenge drama: Michael Kohlhaas is a man wronged who seeks redress through the law.  When that finally fails, he takes matters into his own hands.

The film is, however, something more than simply a Western set during the Reformation or early Enlightenment.  It is about how a man can remain a mystery even to himself.  And as such, it remains faithful not only to the spirit of Kleist’s long short story (completed in 1810, based on a chronicle of 1731) but to his vision of the world.  Human beings, mortals, are too wilful and changeable to receive grace.  Nor can they truly forgive.

True, transferring the action from Germany to France does present some difficulties as regards matching story and film: for who is Michael Kohlhaas’s spiritual mentor meant to be, if not Luther?  On the plus side, the cinematography is ravishing, Martin Wheeler has composed a haunting score and Mads Mikkelsen delivers another compelling performance. 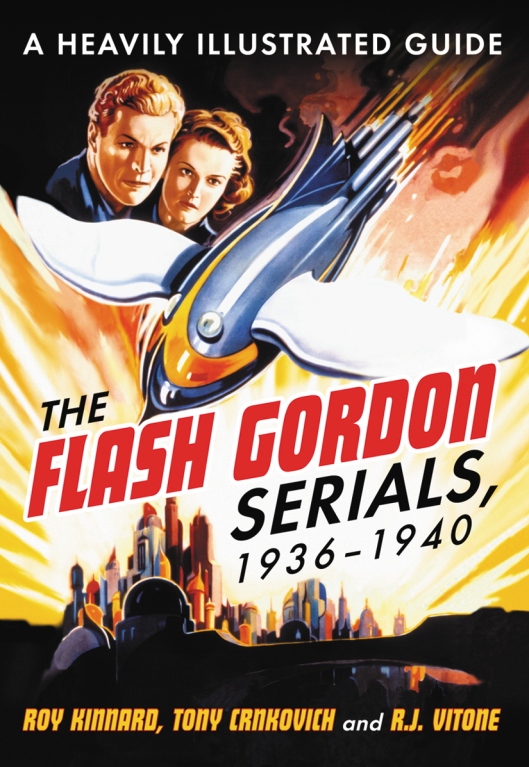 Flash Gordon rocketed onto the movie screen in 1936, in a serial of the same name which ran for 13 episodes.

He appeared in two further movie serials – a now defunct format, killed off by television – in Flash Gordon’s Trip to Mars (1938) and Flash Gordon Conquers the Universe (1940), the latter title indicative perhaps of America’s new-found confidence as an emerging superpower.  Most of us who went to Saturday Matinees as a child, to a Rialto or a local Odeon, will have seen some of these episodes, along with (say) a Laurel and Hardy short, a Disney film or a George Formby feature.  You’d have to have been of a certain age, mind: matinees are firmly a thing of the past.

The authors have interviewed the two stars of the series, Buster Crabbe, an Olympian as well as an actor, and Jean Rogers, who played good girl Dale.  And their thoughts and reflections, together with those of others involved in the triumvirate, have been incorporated into the text.  That gen plus synopses of each and every episode, lots of black and white film stills and publicity photos, and the authors’ erudite and insightful comments, all contribute to making the book an entertaining, informative read.

On one page, for example, we learn that Episode 2 of Flash Gordon Conquers the Universe, an episode entitled ‘Freezing Torture’, makes use of footage taken from Leni Riefenstahl’s White Hell of Pitz Palu.  While another similarly titled episode, ‘Flaming Torture’ (episode 6 of Flash Gordon), features a weird ballet sequence taken from The Midnight Sun, a silent film from 1927.  That film has been lost for a long while; the fragment of the ballet is all that remains.

Priscilla Lawson, who played the captivating Princess Aura, is present in the photos and stills but was unable to contribute.  She died young, following an injury in World War Two.

The Flash Gordon Serials, 1936-1940 is an ideal companion volume and a boon to all who love the character of Flash Gordon.