This is a brilliant adaptation of Philip Roth’s coming-of-age (and then some) novel.

Marcus Messner (Logan Lerman) is a Jewish lad from New Jersey (like Roth himself) who wins a scholarship to attend an Ohio college, thereby escaping the draft for the Korean War. At college he dates Olivia (Sarah Gadon), a beautiful but emotionally turbulent girl with a history of self-harming. He is puzzled when she gives him a blowjob and wonders whether she has done it before and who with. An highlight of the film is Marcus’s conversations with Dean Hawes Caudwell (Tracy Letts), the head of the college. These conversations are intense fencing matches that continually swerve from the virulent towards the absurd. His parents telephone Marcus long distance and are anxious about his welfare, but they cannot save him from the world no matter how hard they try.

What I liked best about the film is that it realised a recognisable version of Roth’s world, a world that’s an amalgam of Fitzgerald and Kafka and much else besides. The bleak take-home message is that no one can be saved. We exist for a short while after our death in other people’s memories but they ultimately will perish too. Our last, best hope is art – and that includes films like this.

The people in this documentary film are wonderful, in particular the protagonist, a teenage girl who wants to raise an eagle and train and hunt with it. She loves her father and wants to follow in his footsteps.

The landscapes, the icy steppes and mountains of Mongolia, are wonderful as well, thrilling in their majesty.

What lets the film down is the threadbare, predictable narrative – you always somehow know where it is heading. The contrivance of certain scenes – you don’t entirely believe what you are seeing – is a problem too. And the voice-over, a patronising voice speaking a script which panders to identity politics (look, a girl in a man’s world), prodding you and telling you what to think rather than showing you interesting, complicated stuff and letting you come to your own conclusions – well, that’s another let down.

And in the tussle at the end between an eagle and a fox, why should I be rooting for the eagle? For the predator, rather than the prey? Clearly, a fox has as urgent a claim to precious life as any other creature.

Very worthy and all that, but really this is a very poor film.

This is a curious, difficult to pigeonhole film, neither a feature nor a documentary, rather a vital hybrid of both.

Two young people, who are in fact Laurence Rupp, an actor, and Anja Plaschg, a singer-songwriter, gather in Studio 3 at the Funkhaus in Vienna – you can see Hilda Jesser’s paintings arrayed along the panelled walls – to record the letters written between Paul Celan and Ingeborg Bachmann. In between speaking and responding to the letters, they do various banal stuff: smoke cigarettes, play about with a phone (listening to James Brown, appropriately enough), show off tattoos…

Very accomplished and possessed of a sure, confident touch, The Dreamed Ones (Die Geträumten in German, an epithet used by both correspondents) is a moving film, and this due mainly to the quality of the texts: Celan, the great poet of the Holocaust, and Bachmann, another intense, fragile, painfully authentic soul too. A very worthwhile watch, though you will get most out of it if you have a good working knowledge of German, I would say.

Ruth Beckermann’s  body of work is worth exploring. Lookee here.

Our departure from Europe has been much exaggerated.

The concert itself, wherein each of the three finalists played alongside the Royal Liverpool Philharmonic Orchestra, was a dazzling affair. We heard Mozart’s Piano Concertos 20 and 21 (from Daumants Liepins and Florian Mitrea respectively) and Beethoven’s Piano Concerto No 3 (Clement Lefebvre). Each performance was received with fulsome, fraternal enthusiasm.

This Concerto Final was the climax of the fifth James Mottram International Piano Competition, a week-long event which attracted and showcased the talents of the best young pianists on the planet. They came from all over, including from Europe, as was plain to see. Long may it continue, until Brexit and beyond. 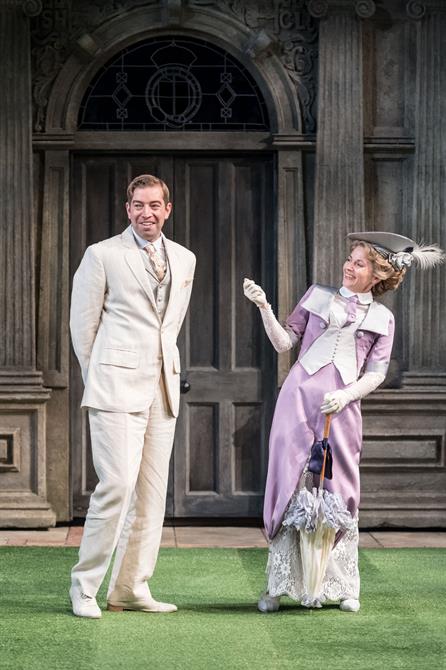 This, the first of the comedies (see Much Ado About Nothing), is set in 1914, a ludic and light hearted Arcadian Age.

Berowne (Edward Bennett) woos Rosaline (Lisa Dillon) with insouciance and mock ardour: as though he has all the time in the world. Don Armado (John Hodgkinson) is a grand figure – an Italian Falstaff, he by right belongs in an opera – and it is interesting to observe the response of the Academy’s dry Latin scholars (who’re pedantic, precise and just a sprinkle prissy) to an actual, rude as life, gross Italian. They cannot escape from Don Armado’s attentions; there are no safe spaces on stage.

The end of this play always has an elegiac feel (the marriages have likely been scuppered not deferred) but with the intrusion of war this is more pronounced still. ‘We’ll meet again’? No, these lovers have been cast asunder forever. Rosaline’s expressed desire to ‘choke a gibing spirit’ (she is taking aim at Berowne’s care-free wit) seems eerily prescient in this regard, a shadow before darkness (think of the gas attack at Ypres on 22 April 1915) descends.

If this all sounds very gloomy, I apologise! It is actually a very enjoyable play and there are deft comic touches throughout. There is the display of ‘vocal magnificence’ and exuberance (poesy and rhetoric are its subject as much as courtship) that made it Harold Bloom’s favourite play. In a sense, there are two plays here: an Edwardian comedy, as you experience it in real time, and a tragedy in retrospect.

As an aside, I have always found the backstory romance between Berowne and Rosaline intriguing (‘Did I not dance with you at Brabant once?’ and all that) and wish someone (ideally, Tom Stoppard) could be encouraged to build a play, a prequel to Love’s Labour’s Lost, around it.

Much Ado about Nothing and Love’s Labour’s Lost are at the Opera House in Manchester until 3 December, then they play at the Theatre Royal Haymarket in London until March 2017. Details here.

This story is told in the voice of a woman whose daughter has been abducted.

As she tells it,  we learn all about her marriage, an abusive – reciprocally abusive, let us be plain about that – relationship, and come to realise the nature of the world into which her daughter was thrown. It is a fraught, mistrustful, edgy world; a claustrophobic purgatory where souls gleam darkly.

Throughout, it is the voice that holds you fast and Colin Winnette captures its despair and bewilderment and rage. As a writer he evokes Dennis Cooper, the Denis Johnson of Jesus’ Son, the inviolable truth of Breece D’J Pancake: he inhabits their America, he’s in that kind of league. For me, he was a real discovery.

Just thinking on the loss of a child: the consequences couldn’t be anything other than tragic and violent, and so it proves. Those to whom evil is done, do evil in return.

The publisher’s description of Coyote can be read here.