This is Jack Nicholson’s best film.

He plays ‘Badass’ Buddusky who, together with his com padre ‘Mule’ Mulhall (Otis Young), takes pity on Meadows (Randy Quaid), a green cadet who had messed up big-time. Their job is to escort Meadows to a military prison but along the way they show him – and themselves – a good time. That’s it.

It is full of humanity and compassion and sly critiques of what it means to be a man – a great, great film.

Water and Sugar: Carlo Di Palma The Colours of Life This fine film celebrates the life and work of the great cinematographer Carlo Di Palma.

Di Palma came of age in the golden age of Italian neorealist cinema, working on films such as Rome, Open City and Bicycle Thieves, but his best work was done in collaboration with Antonioni. Red Desert and Blow-Up are two of the films they worked on together.

Later, he directed his own films, worked with younger directors like Bertolucci, and had a long, long collaboration with Woody Allen (12 films all told).

The best comment here comes from someone who describes Di Palma as ‘a master of light’ – that is the perfect epithet for the man. This is a pretty good (self) portrait of David Lynch, artist and auteur.

We see him in the studio making art. He talks about his childhood and early life. His discovery of art (a book of importance to him was The Art Spirit by Robert Henri) and then film. It ends with his time in Los Angeles making Eraserhead. He is on his way.

I like a lot of what he says – for example, that he thinks of ‘the art life’ as smoking a cigarette and drinking coffee and spending the day in creative work. Or when he says of his earlier paintings that he knew they sucked but he wanted to keep on painting to get to the good stuff: it chimes with what James Sallis said to me once, when I asked what advice he would give to an aspiring writer:

Work. Most of us have thousands upon thousands of bad words and bad writing we have to get out before the good stuff starts coming – if it starts coming at all. So you may as well get started.

David Lynch: The Art Life is a fine film which will be of interest to all who love David Lynch and cinema and art.

My interview with James Sallis is still online and can be read here. There is an oceanic feeling to all of Terrence Malick’s films, which I like.

Here, all of the main characters have a voice and a perspective and a story to tell and they come at you in motion, each a crashing wave. Cumulatively, you are shown something rich and strange. Not life exactly, but lives in motion. Moments, yes, yet memory and emotion too, and an awareness that this may not be (indeed, it probably is not ) the full story.

To be frank, the characters here are not that remarkable: Michael Fassbender plays a cunthound, so reprising his role in Shame; Rooney Mara is a bit of a blank canvas, a chameleon who lives her life through others: she is uncertain even of her sexuality; Ryan Gosling is a brand of damaged goods; Natalie Portman is a woman who wants love and cannot abide its perversion. But throughout it is the manner of the telling that is important, together with the feeling of freedom and openness that it engenders. As well as the  stories told, there are other stories here too. They could also be written.

The Death of Louis XIV A ravishing vision of the royal court.

Who would not want to be the King of France? You are surrounded by luxury. As you lay on a red velvet bed, exquisite food is brought to you on the finest silverware. Servants are around to attend to your every wish. That’s the up-side.

Yet this king is dying as his body – flesh and blood, like Christ’s – rots; and as he loses his faculties, it undermines his capacity for enjoyment. He is not able to swallow, he lacks appetite, his tongue petrifies. Under these conditions the body becomes a betrayer – and even the royal kitchen’s delicate confections lack flavour and relish.

This extraordinary film has an overpowering atmosphere of opulent decadence, the decadence and dissolution arising not from (or not alone from) amoral hedonism or rich brocade and the like, but from corrupt human flesh. One of those films that makes you realise that art is reportage before it is anything.

This film reports on the experiences of the Ta’ang, a Burmese people fleeing fighting in that country and ending up sometimes in China. Most of the refugees are women and children; the men are absent, away killing or perhaps killed. Nights are spent around a fire, cooking simple food, mothers trying to keep their kids in line, only going to sleep once their children have nodded off. Old people without family are offered a helping hand. The women pay off smugglers, steer away from official authorities, stand up to the world. Cope with human folly and evil, as always.

Migration is our future: with war and environmental collapse on the rise, how could it be otherwise? And the migrant situation in Italy right now looks dire. Europe looks set to face another crisis as in the Summer of 2015. Into Claire’s life, content with leading a dutiful existence as a midwife by profession and the mother of a twenty-something son, comes Beatrice, her father’s former mistress.

You get what the film is saying: Beatrice is a midwife too, or a catalyst anyway, she brings something into being, giving Claire (Catherine Frot) a spontaneity and a joy that she had not had before.

But it is rather a pedestrian film, very uneven throughout, though Deneuve is always worth a watch.

The Tree of Wooden Clogs Watching Chekhov, that is what it seems you are doing as you view this film.

He is talented and bright, young Minec, a peasant’s son. So he goes to school , the first in his family to do so, walking five miles there and five miles back. Accident and a father acting out of the best of intentions leads to tragedy.

That is one story and there are several others, each in its way showing the peasants’ piety and purpose, their solidarity and sometime stupidity. We see political protests and skirmishes with the police and army – you think of Visconti’s The Leopard, to which Olmi’s film is a kind of counterpoint – and technological advances (a landowner plays a phonograph, Minec describes using a microscope at school to see bacteria) but this is background noise almost. Our blessed people live apart from this, helping each other as and when they can, their models are Christ and the Madonna and the saints.

On the road, bound for a place of sanctuary, a Bethlehem, the final scene has an inevitability about it. You could say it alludes to the Bible but actually every thing in the film – for example, a mother giving birth – has a sacred timeless quality about. It is a world that children would understand. Christ is incognito but always present, as in Babette’s Feast. This is a great, great film. 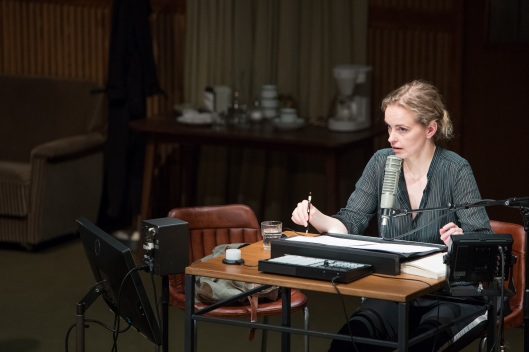 It is a European affair.

Appearing as part of this year’s Manchester International Festival, Returning to Reims is an adaptation of Didier Eribon’s memoir Retour a Reims. Schaubühne Berlin produced the play and the German actress Nina Hoss, star of Barbara, takes the lead. And the performance, as well as some of the cinematic content, for example the mistaking of minds between Gordon Brown and a certain Mrs Duffy in the fair town of Rochdale, is in English.

The director Thomas Ostermeier describes Returning to Reims as a play about populism and in particular a play about ‘the role of the left in the rise of the right’. And as such it is more of a discourse, or a discussion piece, than a drama – though the conflict between Eribon’s sexuality and his working class roots adds some much needed human interest. As political discourse, the play provides few comforts or solutions – probably because there aren’t any – and we will likely keep trundling along until another crisis (financial, migrant, environmental…) hits home. Communism is dead in the water, it came to an end with the collapse of the Soviet Union, though a few brave souls like Slavoj Zizek, bless him, are still holding out for revolution. Neoliberalism was found wanting when the financial crash hit in 2008, but most mainstream politicians – whose stupidity and / or venality should not be underestimated – still behave as though it offers a viable model of how the world works. It doesn’t: which means that they, and so we, will come to grief. When you have no grip on reality, you will be punished. Inevitably.

Returning to Reims is playing as part of the Manchester International Festival and is at HOME until 14 July. Details here.

The Making of an SS Killer

This book presents a portrait of an ordinary Nazi – not Hitler or Himmler or Heydrich, but one who did their bidding.

From June-October 1941, Alfred Filbert (1905-1990: he led a long life, dying peacefully in Saint Gertrude’s Hospital in Berlin) was the chief of Einsatzkommando 9 of Einsatzgruppe B and, by way of distinction, probably the first such chief to murder women and children. At the end of July 1941, in Vileyka, 450 Jewish men, women and children were murdered by Einsatzkommando 9. Also in Vileyka, in August 1941, twelve women teachers were among 82 Jews murdered. And that month in Surazh and Haradok, there was a quantum leap in killings: about 2600 Jews were murdered (two thirds being women and children) by Einsatzkommando 9, with the Wehrmacht providing voluntary assistance. To September and a ghetto was dissolved in Yanavichy, with 1025 Jews murdered. And Vitebsk – where Chagall, that dreaming angel, was born – saw another ghetto dissolved in October , with this time approximately 10000 Jews murdered. Whatever you may say about the Nazis, they did keep very full records – and note, the numbers were steadily increasing all the time.

What is important to emphasise is that even before Hitler made the decision to kill all Jews under Nazi control (this occurred on 12 December 1941, according to Christian Gerlach, following the attack on Pearl Harbor and Germany’s declaration of war on America) significant numbers of Jews were murdered on the Eastern Front as part of the race war (Rassenkampf) against the Soviet Union. Alex Kay suggests that this was following verbal instructions from Heydrich, but in point of fact you don’t even have to buy that. The Judeo-Bolshevik myth was part of Nazi ideology: because of this, Jews were a legitimate target anyway.

Despite the magnitude of Filbert’s war crimes, he escaped detection until the late 1950s. Another Nazi squealed, that’s what set the West German authorities on to him. They were not actively looking for Filbert at the time. At his trial Filbert portrayed himself as a loyal soldier and pleaded that he was only following orders, but was found guilty nonetheless and imprisoned from 1962-1975. Thereafter he always saw himself as a victim, a casualty of injustice. In truth he had this mind-set anyway, so it was likely not a consequence of the trial and verdict, though naturally that didn’t help.

The book ends with almost one hundred pages of footnotes: it is very well researched, an in-depth study of the life and misdeeds of a shallow, petty little man. Yet that is rather Kay’s point: people like Alfred Filbert, a law graduate incidentally and so by no means uneducated, were necessary functionaries, essential cogs in the Nazi machinery, and without them it could not have worked as effectively as it did.

The publisher’s description of The Making of an SS Killer: The Life of Colonel Alfred Filbert, 1905–1990 can be read here.