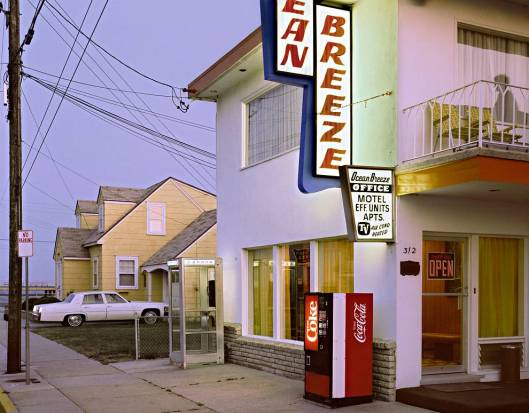 This retrospective exhibition of work by the renowned Austrian photographer Alfred Seiland was a highlight of our annual visit to the Albertina.

At its heart was an early series, East Coast – West Coast (1979–1986), which featured photographs of America. However, these were not photographs of iconic American landmarks or cities. Instead, you would typically see automobiles (real gas-guzzling machines), looking now as antediluvian as mainframe computers, as ill-designed and ill-adapted as the platypus. They would be parked outside motels or flimsy-looking apartment buildings, below neon signs, or sitting on vacant lots, idling in the streets of small towns arising out of an oppressive desert landscape.

To begin with, the photographs look like a charming slice of late twentieth century Americana, landscapes you would like to step into. You think of TV cop shows, neo-noir films, the novels of Elmore Leonard, Richard Stark and Newton Thornburg. But then you think: No, I would feel hopelessly uprooted and lost here. Look at the buildings: they are makeshift, impermanent, not built to last. There is no recognisable sign of history, a lack of human attachment or atmosphere (or rather: that is their atmosphere). Placid yet precarious. Treacherous. Alien, even.

Included also are some photographs from a campaign that Seiland did for the newspaper Frankfurter Allgemeine Zeitung between 1995 and 2001. Typically, you would have a famous person (a small figure in a larger landscape) reading the newspaper, their face obscured. So you do have to take it on trust that it is who they say it is. It had its moments, notably one with Helmut Kohl ensconced on the good ship Europa, entering choppy waters, then as now. Klaus Maria Brandauer, the great Austrian actor who starred in The Magic Flute in Salzburg over the Summer, was in one of these photographs too. (That trio of films he made with Itsvan Szabo, above all Mephisto, will undoubtedly stand the test of time.)

As well, there are a bunch of photographs of Austria and a selection from another series, Imperium Romanum, focusing on the territory of ancient Rome; Don McCullin recently hit upon this as a subject too. This latter batch shows cities and urban spaces in the Middle East, taken often with the desert as a backdrop. All look somehow unsustainable and at risk: an eerie aura here.

If I had to explain why I was so fascinated by Alfred Seiland’s outwardly unpretentious pictures, I would say it is because they seem to show the faultlines of a society within an ordinary milieu. They don’t show violent crimes or even awful accidents but they suggest how such accidents might happen and escalate. You don’t see doom-laden catastrophes or tragic incidents but its clear that, with just a slight push here or there, such incidents could occur, spiral out of control and cause harm. Within all these landscapes there is a muted dynamism coupled with a lack of care – an absence of attachment and investment to a particular place and time – which means that if and when something goes wrong, it will go very badly wrong indeed. What is to stop it?

When we left the Albertina (eventually) the sun was scorching in the city, as everywhere this past Summer. So we went to Heiner’s for lunch, where I had a large glass of chilled soda-water followed by a ham roll and salad and a cherry crumble cake, one of their celebrated Fruchtkuchen, to end: good Viennese fare.

The exhibition features around 80 photographs by Alfred Seiland and is showing until 7 October. Details here. 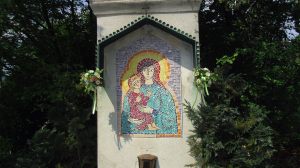 A photo of Madonna and Child seen in Salmannsdorf, enroute to Dreimarkstein in the Vienna woods.

There is a pleasant restaurant at Dreimarkstein called Hauserl am Roan. From there you can take many walks. The best known being to go on to Hermannskogel, Kahlenberg and Leopoldsberg, descending through the ‘nose’ (so called because of its steep descent) to end up in Nussdorf.

A wonderful day out!

The river sweats oil and tar… 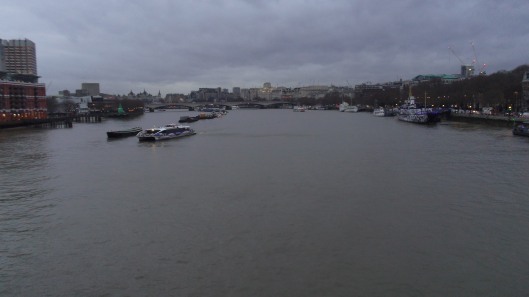 The river sweats oil and tar… Photo by P.P.O. Kane

A photo taken on Blackfriars Bridge, looking out onto the Thames towards Waterloo Bridge, Somerset House and Victoria Embankment. 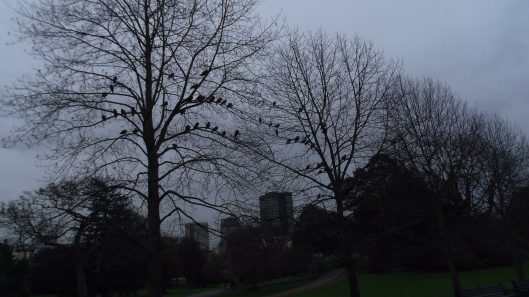 A photo taken in Regent’s Park, while walking from Camden Town towards Bloomsbury. 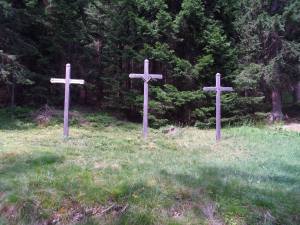 This is a photo of three crosses that I saw in Lower Austria in August.

The crosses can be seen on the Wechsel Wanderweg, after walking up from Kirchberg and going towards Schwaig, enroute eventually to the Hochwechsel.  Trees to each side of the dirt path. Timber piled high in places. Anthills spaced along the way. Then suddenly you come across these three crosses: 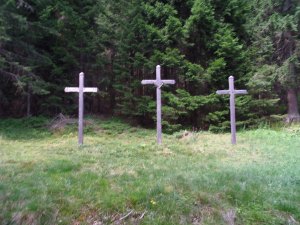 Here are five pictures of Otto Wagner’s Kirche am Steinhof, one of the most beautiful churches in the world.

First, the view as you ascend towards the church from the hospital: 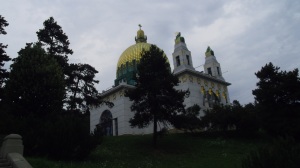 Standing immediately before the church, four angels above the entrance: 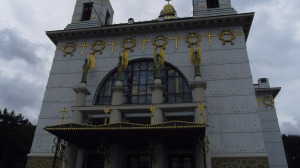 Inside, facing the main altar: 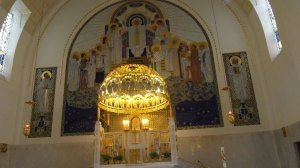 There are stained glass windows within and this fresco to the left of the altar: 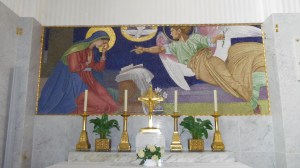 And, to the right of the altar, another fresco: 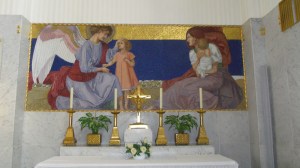